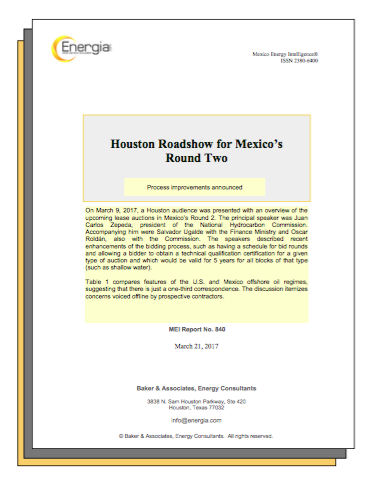 HOUSTON ROADSHOW FOR MEXICO’S ROUND TWO: Many process improvements

MEXICO’S ROUND ONE OF HYDROCARBON LEASES was a success as measured by the number and diversity of oil companies and investors from around the world that qualified as bidders. In four auctions in 2015‐16, 39 contracts were awarded. Of the 55 areas that were offered in the auctions, 71% are now under contract.

Speaking to an audience of some 200 persons at the new Hyatt Regency Galleria, three government presenters from Mexico City offered fresh ideas about how to conduct Mexico’s upstream oil business. The speakers also clarified nagging questions that other federal officials had not been able to answer with confidence. Of these, the most far‐reaching concerned the ability of CNH contractors to freely dispose of their share of oil or gas, as by direct, bilateral negotiations with potential buyers in Mexico or direct sales to foreign buyers.

Of the fresh ideas, the most unexpected concerned the Hydrocarbon Information Center’s new policy that would grant a license to interested parties to access a century of subsurface data that, previously, had been classified by Pemex as “Confidential.”

The initial speaker, Juan Carlos Zepeda, CNH’s founding president from 2009, opened the program by inviting the audience to raise questions as he went through his presentation.

In this report, we examine the process improvements that were described, noting also where there are investor concerns and disincentives. Table 1 compares 28 features of the Gulf of Mexico oil regimes of the United States and Mexico, noting correspondence in just a third of those listed.

Save this product for later